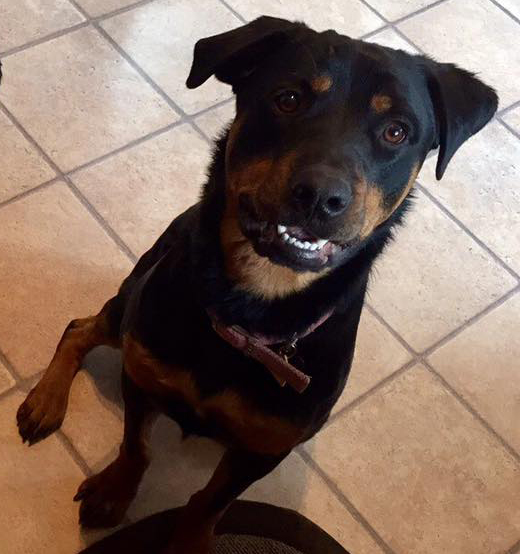 Daisy is just a year old, still very much a puppy. She is spayed. She is up to date on worming and vaccinations, and is microchipped.

Daisy takes a little bit to warm up to new people and does appear to be a bit protective of her people, house and yard, but once she meets you (on her terms) and gets used to you, she will be THE BIGGEST SNUGGLE BUG you have ever met in your life. It’s like she can’t get close enough when she wants to sit with you lol. She is still very much a puppy and looks to me for direction with things. She will pick something up in her mouth that she’s not sure about, and look directly at me, like, is this okay?? She also has those silly bursts of energy, and will sometimes try to jump up, but we are working on that.

She has a long dock on her tail, which reminds me of a pointer. She can wiggle that thing a zillion miles an hour and she does! Happy happy, all the time. I have 6 kids in my house, and she adores all of them. I also have an older, grumpy male dog, who she loves much more than he would like her to. 😛 But even if he snips at her, she just bounces off and goes about her day. She has been around other female dogs and does okay, but she is not submissive, so there can be arguments. She has had interaction with the barn cat and seems interested but just sniffs and walks off. I’ve also introduced her to horses and she does well.

Daisy walks nicely on a leash. She knows sit, shake, kennel, lie down, she will roll over most of the time, and we are working on stay, and some keywords, like cookie, ball and toy. She responds to no, and comes enthusiastically when called. She’s very gentle taking treats and has no possessive aggression problems with people that take her toys or move her food bowl, etc. She may be a bit wary of another dog doing this, though. She is potty trained and does ask to go outside. I think she could easily be bell trained, we may work on that. She does play fetch very well and usually willingly gives you the ball, she will even put it right in your hand. She also loves chewing her Kong and playing tug-o-war. I do kennel her at night and when we are gone, and she does just fine in her kennel. I’m home with her most of the day and she really doesn’t get into much trouble, but I still think that’s the right place for her when we’re gone, for now.

Update 5/1/17: Daisy is doing great!! She has been to many places with us and enjoys car rides. Her trust in people gets better every day and the last few new people she has met, got a sniff and a wag and that was that. She has several doggie playmates and has fun with all of them. She has gained some weight and muscle and looks really good, still working on her “gains”. lol She is just SO HAPPY all the time and she really does need plenty of attention from her people, or she does tend to get in trouble or sulk. But, she’s young and I don’t really know if she missed out on all that when she was a puppy- maybe she’s making up for lost time? I don’t know, but I can always count on her as a cuddle buddy or a listening ear when I need one! Daisy is very athletic and would make an AWESOME candidate for agility or flyball, and she learns things incredibly fast. She is going to make a lucky family a really awesome forever dog!