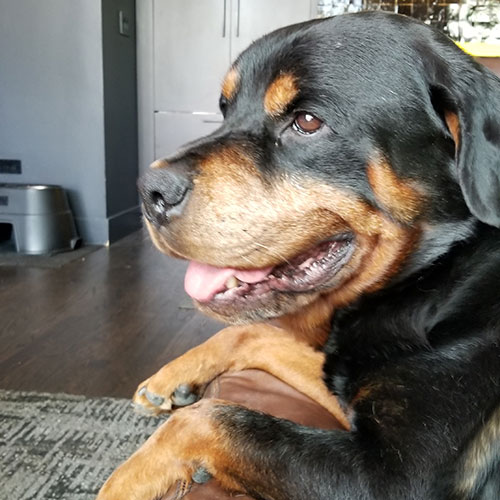 BIO: The Story of Meeko  – An affectionate, caring and wise Rottweiler

SEARCHING FOR A FOSTER FOR THE AFFECTIONATE, CARING, AND WISE MEEKO!

MEEKO is currently basking in the glow of freedom in his foster home in Chicago (Wrigleyville / West Lakeview).  He was rescued from a puppy mill in NE where it is believed to be where he spent his life in a cement based caged kennel.  He was believed to be 2 years old, but discovered his chip which puts him approximately 6 years old.

Meeko is one, if not the most, affectionate Rottweiler you will meet.  He has adapted from his caged country living to the freedom and exploration of the city of Chicago.  In our short time he is loyal while showing his excitement when I come home from work.  Many times, finding him get tangled in my feet as he can’t get enough affection.  He loves walks to see what this new environment can offer him.  On this journey, he loves human affection, on-going “pets”, and more importantly share his full body leans – on anyone!  He is patient and good with all he meets including kids of all ages & toddlers 2 and under.  He could be “Carl” from the books, based on the observations and kisses he wants to share and no negative reactions toward kids.  He is famous at the local Starbucks as they let him come inside and meet all the customers. In addition to human interactions, he has been good joining a home with another 2-year old Rottweiler.  With all the good, he is a Rottweiler.  He has been good with his brother and the dogs he has met on his walks.  He tends to favor smaller dogs and those that don’t appear to look him in the eye.  He has been fine with visits from other dogs in the house.  He has become more confident on leash which may be impacting his desire to want to meet them all.  He has had a couple of moments of dominance but not aggression, many times just by his growl while his tail wags continuously.  With that, he could use a bit more focused training while on leash (come, sit, stay) – we are working on it!  He loves treats and will “sit, stay, come” and responds to “no”.  We are working on “leave it” but his an experienced rottie with stubbornness and selective listening – LOL.  He is good eating at the same time with his brother but lately he has started to want his brother’s treats as well as his own.  We are working with him to share. One other observation for work, he does not seem to know how to “play” which appears to be a result of being kenneled the majority of his life.  He is starting to like the squeaky type of toys, the chew bones, and is slowly playing tug-of-war with his brother.

As to his health, he has been receiving wonderful care for typical issues with GI and adjusting food,he has lost some weight.  He has tested negative for heart worms, parasites with medication.  He is not super active, nor jumps, but climbs, he is not a fan of getting in/out of the car (SUV).  They believe there may be some leg pains but due to age as he is not a fan.

He will be with his foster family to ensure we find the best match and care for Meeko.  MARR is seeking a home that has Rottie experience and who has affection to share, walks to give, desires a bedtime companion, while seeking a low-maintenance, wise Rottweiler.  He loves to sleep and lounge when not on a walk, not highly active at all.

If you’d like to adopt Meeko, you can visit our Adopt page where you can find information on our adoption policies, and fill out an application.