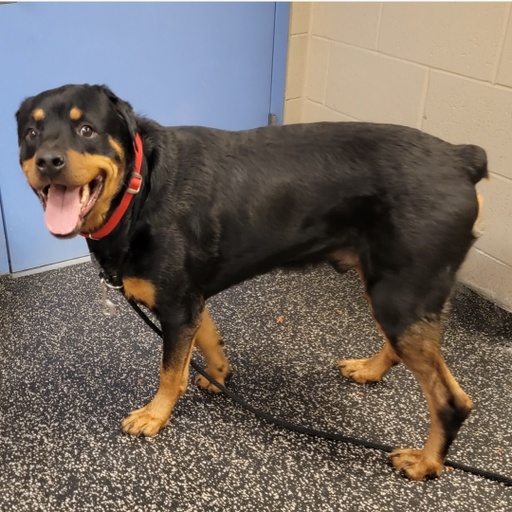 Characteristics: Apollo went into the shelter due to owner’s health and not being able to keep him, and quickly became anxious and stressed. He had no known behavioral issues in previous home but does not like being in the shelter at all. He was put on trazadone for the stress.

Notes from evaluator: Apollo was very energetic, friendly, even had some Zoomies! Apollo is attached to one of the staff who works in the kennel area and does walk him- he was jumping and trying to lick her face, very friendly and seeking attention. He did come up to me several times, wanted me to pet him and scratch his bottom. He showed no signs of hesitancy, was curious in the room, but did have some anxious breathing.

He appears younger than 3 – he is a small boy, needs to put on some weight. He does not appear to be 90 lbs by any means. He would sit on command with a hot dog treat – he will need some training and manners i.e. jumping up. Apollo is a staff favorite and they speak highly of him!

Apollo did have an incident where a staff member who went to put a leash on him and he did turn and bite staff member; punctured skin but no medical attention needed. Subsequently they found out he had double ear infections so this is most likely a reaction to pain in his ears. He has been treated for the ear infections and has shown no further signs of aggression even when they put the martingale collar over the head (which they do loosely) three times a day to walk him. Apollo is URGENT due to shelter stress! He will be a great family dog once he gets out of his current environment and gets used to new surroundings!