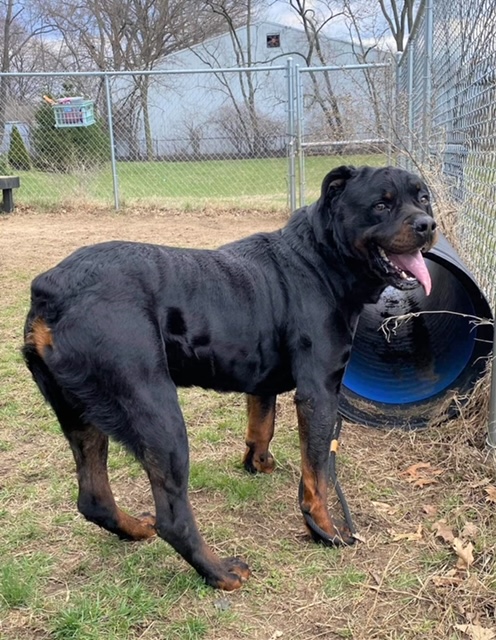 Name: Jack
Location: Mishawaka, IN
Sex: Male
Weight: 103.5
Spayed/Neutered: Yes (at shelter)
Age: Approx. 3 years old
Good with Men: Yes
Good with Women: Yes
Good with Dogs: Yes; was interested in female in the next run and they were chasing each other through the fence; no signs of aggression
Good with Cats: Non reactive at shelter
Children: Did fine with grandaughter in previous home but initial assessment from shelter they think he will do better in a calm home without kids
House Trained: Yes
Crate Trained: No–is scared of kennel
Medical Issues: HW positive; on anxiety meds for shelter stress
Immunizations: UTD
Rabies: 4/6/22
Parvo/distemper: 3/30/22
Bordatella: 3/30/22
Heartworm test: 4/6/22 Positive…started on doxy
Characteristics: Jack we was surrendered to the shelter by owner who was moving out of state and couldn’t take him with him. Jack’s previous owner was a male and he is good with men, women and kids. Jack was good in previous home with 8-yr old granddaughter. However, the shelter does not recommend kids but will reassess as this was from initial assessment (because they feel he will do best in a quiet home). He is non-reactive to unknown dogs and people on leash. He is also non-reactive to the cats in shelter. Previous owner says Jack knows sit, down, stay and come.
Jack is quarantined due to his heartworm positive status. Per the shelter, “our quarantine dog ward is the worst set up where dogs face each other and the ward has metal walls which makes it even louder 🙁.” Based on his profile and his previous owner, Jack will do much better out of this environment and best in a low traffic home.
He seems independent and interested in other dogs. More interested in the environment than people. He seems aloof in this environment.
Behavior assessment: does not show resource guarding in shelter but previous owner said he would growl over bones. Jack allows being restrained but does not like it.
Medical: Jack is HW+ and shelter has started him on doxy. Highly stressed in shelter environment – Taking trazodone + gabapentin combo to reduce anxiety, to be evaluated for transition to fluoxetine long term.

Jack is a reserved boy who needs to get to know you before he warms up. Once he does, he is very loyal and protective! He is calm and very curious of his surroundings. He loves to chase tennis balls but has not been interested in treats. Jack does need socialization and some training. He does pull on a leash. Jack will flourish once he gets out of the shelter and into a quiet home where he can regain his trust in people after being turned into the shelter. Jack is such a good boy waiting for the chance to warm up to his people!